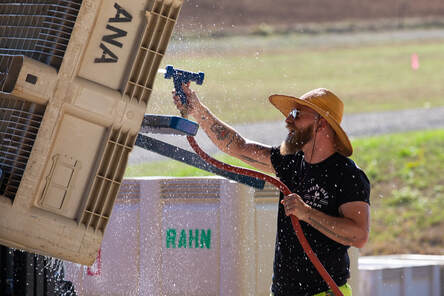 Photo by Nick Hoogendam
Luke's career in winemaking has taken him all over the world. He has worked vintages in New Zealand, Australia, a couple in Germany, and he even worked as a harvest chef in Burgundy just so he could sort and briefly work with some Grand Cru Clos de Vougeot and other esteemed vineyards. After all that traveling, Luke wanted to move to Oregon's Willamette Valley to pursue a domestic job in a cellar there as the weather and cooler climate appealed to his desire for wines with lower alcohols and natural acidity. It was during a two year stint at Anne Amie Vineyards that Luke met his business partner, Meredith Bell and in 2014 the two created Statera Cellars, Oregon's first all Chardonnay winery. Being part of the Abbey Road Farm family is a thrill for Luke as he has always wanted to end up working at a winery with an estate vineyard that wasn't primarily focused on Pinot Noir production. If you are at the farm, look for Luke in the vineyard, climbing around the barrel room, or offering curated tastings for VIPs, always with his dog Hatchet in tow.